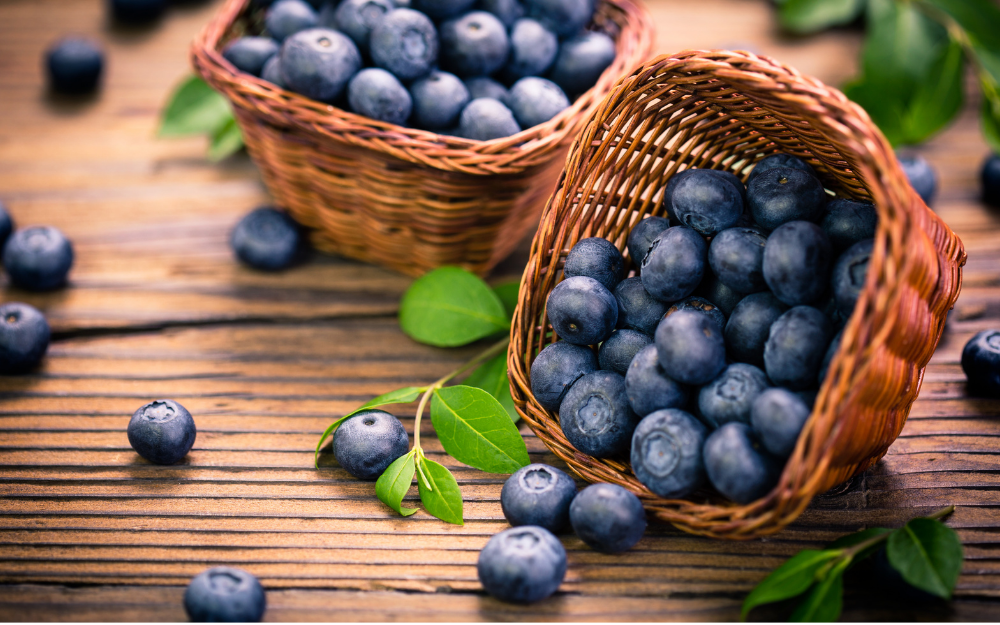 Rich in nutrients and health-promoting antioxidants, blueberries are deliciously sweet and offer so much nutritional power that I encourage my patients to consume them on a regular basis. Plus, they’re really versatile!  You can eat a handful as a healthy snack or incorporate them in your breakfasts or desserts.

So, given all the ways you can eat them, plus the fact that they’re so easy to get any time of year, let’s discuss the many health benefits of blueberries. You’ll leave knowing exactly how this delicious fruit supports your health and wellbeing.

What Makes Blueberries So Healthy?

Blueberries are native to North America, and their peak season is summer. But thanks to modern production, you can find them anytime. Usually, you don’t think of something so readily available as a great health food, but that’s exactly the case with blueberries.

Here are two of the major reasons we see so many health benefits of blueberries.

1. Blueberries are rich in antioxidants and phytochemicals.

First, blueberries are rich in antioxidants and phytochemicals (health-promoting chemicals found only in plants). One of these phytochemicals is known as anthocyanin, and it’s the compound that actually gives blueberries their deep blue color.

Numerous studies, including both animal-based studies and human-based clinical trials, have shown that anthocyanins possess antioxidant and anti-microbial activities. As a result, foods high in anthocyanins are known to support visual and neurological health and even protect against several chronic diseases by neutralizing free radicals.

The health benefits of blueberries aren’t only due to their antioxidant and phytochemical composition, but also due to their rich nutrient profile.

Specifically, one cup of blueberries contains almost 4 g of fiber, 28.6 mcg of vitamin K, 14.4 mg of vitamin C, and 0.5 mg of manganese. And while those amounts may not sound like much, they actually make up a good chunk of your recommended daily amounts (RDA)!

You can get 36 percent of your RDA of vitamin K by eating a single cup of blueberries. And that’s important because vitamin K is incredibly important for your bone health. Simply put, your body can’t absorb calcium properly without an adequate supply of vitamin K.

Accordingly, many studies have shown that vitamin K not only helps to increase bone mineral density in people with osteoporosis, but it also helps to reduce their fracture rates.

Additionally your body requires manganese for proper brain development and cellular health. And one cup of blueberries provides 25 percent of your RDA of this important mineral!

Manganese is known to fight the free radicals that cause cancer, autoimmune disorders, neurodegenerative diseases, and many other modern diseases.  In fact, a 2014 study on 3,996 participants revealed that manganese levels were significantly lower in those with diabetes than in those without diabetes.

Now that you know what makes blueberries so healthy, let’s take a look at some of the top health benefits you can expect to get from eating them!

Here are six of the top health benefits of blueberries.

Thanks to their antioxidant content, one of the great benefits of blueberries is their ability to help reverse signs of aging.

According to a 2013 study, consuming blueberries has been shown to prevent collagen loss.  This is important because collagen, which is the most abundant protein in the human body, is necessary for skin elasticity. Plus, the more collagen you have, the more youthful your skin appears.

Additionally, as confirmed in a 2018 review, pterostilbene, the primary antioxidant found in blueberries, has beneficial effects as anti-aging compounds. Specifically, pterostilbene has been found to inhibit oxidative damage, inflammation, telomere attrition, and age-related cell deterioration.

2. May reduce risk of Parkinson’s disease

I’m sure you’re wondering how it works; I know I was! But to fully understand it, we have to get a little technical and science-heavy for a minute. Basically, there’s a protein in your brain called alpha-synuclein, which is suspected to play a role in the development of Parkinson’s disease.

Now, alpha-synuclein is known to help regulate the release of the neurotransmitter dopamine. And dopamine, which is known to aid motor control, is widely believed to be lacking in those with Parkinson’s disease. And this leads us to the scientific breakthrough that happened in 2014.

To gain a better understanding of how alpha-synuclein works, researchers injected it into fruit flies and found that those flies experienced many negative effects, including shorter lifespans.

Interestingly, the researchers then compared the effects of consuming blueberries with a control diet. They found that the flies who ate blueberries experienced a 15-percent longer lifespan than those who followed the control diet.

While cranberries are commonly known to help treat urinary tract infections (UTIs), you may be surprised to learn that one of the health benefits of blueberries is that they also support urinary tract health.

Once again, the anthocyanins in blueberries are to thank for this benefit. Specifically, anthocyanins contain anti-bacterial properties that are shown to act against UTIs.

In an in vitro study published in 2020, scientists tested the anti-bacterial activity of the anthocyanins in blueberries against multiple bacterial strains from patients with UTIs. Amazingly, they discovered that the blueberry extracts inhibited all of the UTI strains!

So, if you find that you’re experiencing a UTI and you’re short on cranberry juice or supplements, consider turning to blueberries or blueberry juice until you can seek further help.

Would you believe that anthocyanin has also been shown to enhance memory? According to animal studies, some of the benefits of blueberries are their ability to support memory and even boost focus.

Even more interesting? Research has shown that consuming foods rich in anthocyanin boosts focus and attention in children.

The children were then asked to complete certain memory- and focus-related tasks. The researchers found that memory, attention, and focus were all significantly better in the children who consumed a beverage containing anthocyanin than those who drank the control beverage.

Additionally, a 2008 study revealed that supplementing a regular diet with blueberries improved participants’ spatial working memory. While the study lasted 12 weeks, the improvement was seen in just three weeks.

The researchers noted that the flavonoids were responsible for these incredible benefits of blueberries by activating certain proteins in the hippocampus, which controls learning ability and memory.

One of the great benefits of blueberries is their ability so support skin health. Largely due to their phenolic and anthocyanin properties, blueberries have been found to actually support the wound healing process.

According to a 2019 study, the anthocyanins and phenols in wild blueberries actually boosted endothelial cell migration, which is an important factor in wound healing.  And another study found that consuming blueberries could offer protection against premature aging of the skin due to UV exposure.

When you think of health benefits of blueberries, fighting stress and anxiety probably doesn’t come to mind. But that’s exactly what blueberries do! And it may be one of the most critical benefits we’ve discussed.

Here’s why: Psychological stress and anxiety can cause physiological stress on your body, leaving you vulnerable to symptoms and disease development. But oxidative stress has been shown to decrease as a faster rate by consuming blueberries! And because oxidative stress is linked to so many serious diseases, this is a huge benefit!

Additionally, a 2013 study found that the flavonoids found in blueberries can help to moderate anxiety and even provide anti-depressant effects. This is achieved by flavonoids binding to benzodiazepine sites on GABA receptors.

So, the next time you’re feeling stressed, overwhelmed, or anxious, consider reaching for a handful of blueberries to take advantage of these incredible health benefits. You’ll get a ton of flavor along with a solid health boost to help carry you through the day.